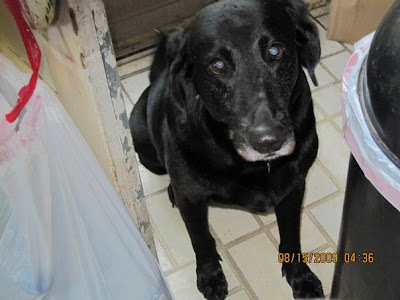 I had to put Noah down this am. Burst tumor, internal bleeding. Very sudden. Very, very sad.
He was such a sweet, gentle, loving boy.

From Suffolk Virginia, to the shores of Long Island, and finally to the Ohio Valley, he was my faithful companion, my special friend.


From the Spring/Summer 2003 LILRR Newsletter...


Why Rescue???
M. Knapp, LILRR
- From Spring/Summer 2003 Newsletter "Rescue Update" -
Friends, family and well meaning acquaintances frequently ask me the question…why do you do rescue; how can you let them go after letting them into your home and more importantly, into your heart?  My answer has always been simple - they give me so much more than I could ever give back to them.  Each of the dogs I have fostered is special and unique.  Each owns a piece of my heart and will forever have a special hold on me.
The two Suffolk, Va. labs I am fostering now, Tar and Noah will, I imagine, have more of a hold on me than the others. While all the dogs entering rescue have a special, often sad story of betrayal attached to them, Tar and Noah, like all the Suffolk labs, have an even more compelling tale.  I was part of a three-woman group that made the first trip to VA that cold, snow stormy Friday in January.  We had a vague idea that what we were going to see would not be pretty but none of us were prepared for the horror that awaited us.  Dogs double chained to trees with no water or food, standing in mud; or the more unlucky ones, standing chest high in feces infested swamp water chained to trees with no escape.  The stench made me gag. I stayed back from the group, speaking to each dog I encountered, promising each that we would get them out of there. 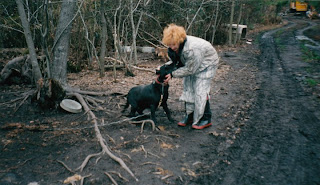 Tar was the first I saw on that endless walk down the long dirt driveway as we made our way to the hell we had yet discovered.  He was a sweetie, a genuine lover-boy.  I looked into his big brown eyes and promised him that he would not spend another night chained to that tree.  I took it upon myself to free a female almost too weak to stand, a bitch with sores covering her emaciated body.  Her eyes too, pleaded for help.  I found some kibble for her and again made her the promise that she would be going somewhere safe and warm.  I promised many dogs that they would be leaving.
At some point I think my brain shut down and instinct took over.  All focus was on getting the dogs to safety.  Safety meant getting those in high water onto knee-deep mud, getting those in the mud onto the truck.  Getting the starving bitches onto the truck … doing whatever was humanly possible to get those dogs out of immediate harms way.  We were tired, we were cold and wet and we were hungry.  The breeder had built pens in the rental truck large enough to accommodate 4-5 dogs each.  None of us realized some of these dogs would seriously harm each other if confined together.  They needed to be separated.  Other dogs were waiting at the bottom of the truck to be loaded on. We housed them the best we could but a few had to stay with us outside the pens if they were to leave.
I can still see the faces of the many other dogs we had to leave behind, and it still makes me cry.  It was getting late.  A man arrived and introduced himself to us as part of a VA rescue (A.R.T.).  His team would come back tomorrow morning to start moving dogs from the swamp to dry ground and safety.
We had originally intended to arrive NY that afternoon.  I don't think we left Va. until about 5pm and didn't arrive in NY until 5am.  Returning with a dozen fewer dogs than anticipated, plans for LILRR to accept Labs from this 1st transport were dropped.  LILRR was already orchestrating a 2nd trip to Va. and other rescues were waiting to accommodate these. 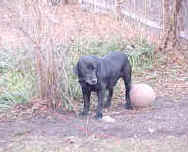 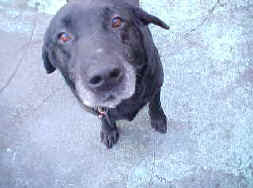 Over that one week, A.R.T. had gotten most of the others off that g-d-forsaken property and they were being housed safely in a sheltered barn.  We brought 19 back with us on the 2nd trip. These were dogs that were not accepted by any of the other Rescues.  These were the ones that had minimal if any human contact in their lives.  These had no names.  This was the group of dogs living way back in the deepest swamp, living in the worst filth, fending for what little food was thrown or floated their way.  These were the sickest and the meekest. Yet none has ever showed any signs of aggression - ever.
Since Tar was so easy (just a few minor necessary adjustments) I asked to foster one from the 2nd transport who required special care.  I had seen a young black male but never touched him, as he wouldn't let me near enough. He was skittish, timid and so very frightened of everything human, everything outside his former world in the swamp.  As I reached into his kennel I could smell the putrid odor that permeated the VA property and remembered how he had lived. I looked into his eyes, gave him my heart, and vowed to him that he will learn to feel safe, secure and confident with people.
I am pleased to report that he, now called Noah, has learned to ignore the every-day sound of the television, radio and coffee maker.  His tail wags and his rear shakes into a dance when he sees me.  He's been on my bed and snuggles regularly with Mr. Kitty.  He doesn't bolt from the room anymore when my daughter's walk in.  He hates the mop, the vacuum but is OK with the dishwasher.  We have taken a few baby steps and have so far to go.  That is OK too.  I get kisses from him and he gets long, long hours of massage.  He adores being touched and I adore rubbing his soft, sweet smelling coat.  He rests his head on my leg and I hold him tight, with Tar and my own Labs at my side, and I promise them again, that they will always be safe and loved.
Editor's note:  delayed to completion of necessary repeat medical tests,
a healthy & happy Tar will become available for adoption consideration late June.
Noah will remain in Foster assessment and rehabilitation awhile longer.

THESE OLD WONDERFUL FACES SAY IT ALL

Posted by Michelle at 8:40 PM 0 comments 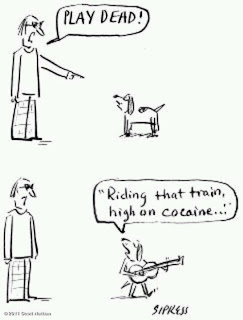 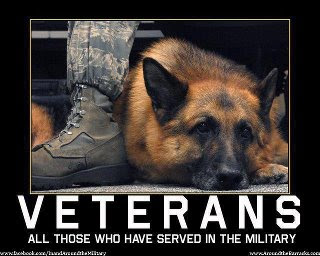 Wishing You a Safe and Happy Memorial Day 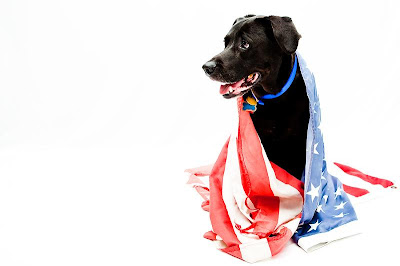 Posted by Michelle at 8:45 PM 0 comments

Ohio, at least, will no longer call all pit bulls 'vicious
By Rene Lynch
May 22, 2012, 9:33 a.m.
Pit bulls have a new best friend in Ohio: lawmakers. Elsewhere, some officials are on the other side of the fence.
A new Ohio law went into effect this week that protects pit bulls from being labeled as "vicious" dogs simply because they're pit bulls. From now on, dogs in Ohio can be labeled "vicious" only if they do something to warrant it.
It's a hard-fought distinction waged by animal rights activists who say it will protect the controversial breed from discrimination. However, the new law does not overturn the rights of local communities to ban the breed outright, as a smattering of Ohio communities have done, according to the Cleveland Plain Dealer.
Previously, state law defined a vicious dog as one that hurt or killed a person, killed a another canine or was simply a pit bull, according to the Associated Press. The change now requires proof that a pit bull is actually vicious.
Many animal rights activists are applauding the  change, but it has plenty of critics who say that pit bulls do indeed make great pets -- until they don't. The breed is so powerful, and inclined to tug and attack until a victim is dead, that ownership should be discouraged, they say.
"Some pit bulls make good pets, but when the consequences are so great, why take a chance?" askedone Plain Dealer letter-writer.
The law change comes just days after the fatal mauling of a 3-day-old child who was momentarily left alone with the family's pit bull-mix in their Beaverdam, Ohio, home.
"Breed-specific legislation" is a hot topic in the canine community. Communities, fearful of injuries (and, let's face it, lawsuits), can turn to breed-specific legislation as a way to protect residents from dog attacks. But activists for animals, including the American Humane Assn., say breed-specific legislation can backfire and end up costing municipalities more dollars than would simply taking steps to enforce existing laws and educate the public about dog ownership.
The AHA points to a case study in Maryland, where one county spent more than $560,000 to enforce a pit bull ban by dedicating law enforcement to it, as well as housing dogs during the ensuing legal battles and appeals over breed determination. (Determining a pit bull is not as easy as it looks, activists say. Some of the most seemingly obvious markers, such as the squared-off head and powerful body, can be shared by other breeds.)
Tips from the AHA for protecting both people and dogs from harm include: Never leaving a child alone with a dog, spaying and neutering pets, socializing dogs around people and other animals from a young age, and taking steps to make sure animals are not able to get out and roam on their own.
By contrast, chaining a dog can cause its own set of problems: It causes an animal to become overly anxious and, as a result, overly aggressive. Chained dogs are 2.8 times more likely to bite than unchained dogs, according to the AHA, which recommends secure fencing to keep a dog contained.
The AHA is also calling for better dog-bite reporting, noting that many studies about dog attacks rely on incomplete police data, hospital records and media reports. (Pit bull defenders say media reports can be skewed, playing up the involvement of pit bulls.)

Posted by Michelle at 3:30 PM 0 comments