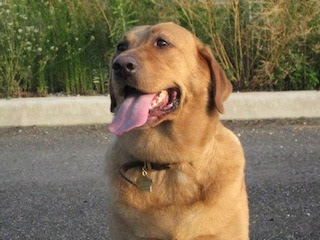 A nice long run in the park and a cup of vanilla ice cream for you today.
Posted by Michelle at 9:54 AM 0 comments

Dedicated to my Baci, who left us on September 11, 2009. Forever missed, forever loved. You were such a good boy.

Posted by Michelle at 1:35 AM 0 comments

We Will Never Forget

On September 11, 2001 an explosive detection dog, Sirius,
working in Tower #2 at the World Trade Center,
gave his life for his country.


Sirius was a Yellow labrador and was the only animal to die on 9/11. He died serving his country on September 11th.
Police K9 Sirius, was a bomb detection dog with the NY/NJ Port Authority Police Department. He and his partner, Police Officer David Lim, were assigned to the World Trade Center.
The morning of September 11, 2001, Sirius and Officer Lim were at their Port Authority Police Station in the basement of the World Trade Center's Tower Two. When Officer Lim heard the sound of an explosion, he thought a bomb had gone off inside the building, and he commented to Sirius, " ... one must have gotten by us."
Thinking he'd be more effective freehanded, Officer Lim left Sirius in his kennel telling him, "I'll be back to get you." as he rushed off to help with the rescue effort. At that time, he couldn't think of a safer place for his canine companion to be than in the basement while he was up doing the rescues.
Officer Lim didn't make it back though; he became trapped in the falling debris of Tower One and wasn't pulled out until more than five hours later. Sirius, however, perished in the tragedy, leaving Officer Lim without his faithful partner.
Posted by Michelle at 1:21 PM 0 comments 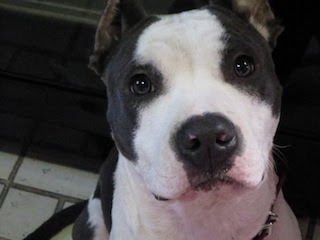 It was one year ago today that Ruby came into our lives. My daughter Liz woke me from a sound sleep in the middle of the night because she thought she heard a dog outside moaning in pain. Groggy from sleep, I reluctantly went outside to investigate. Laying under the streetlight on the grass by my curb was the most horrifying sight - a mauled pit bull, lying on her side in a pool of blood.
The police were called who in turn called emergency services to pick her up. Afraid of what they would do to her, I insisted on knowing where she would be taken, and announced that I was following them to the emergency vet and would adopt this dog.
Ruby had her first surgery that night. Four more were to follow at another vet clinic, where she stayed for seven weeks. Five surgeries total, plus TOH insisted on spaying before they would release her to me.  She was approximately 8 months old. Finally the day came when I could take her home. 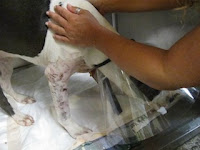 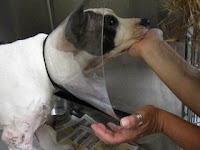 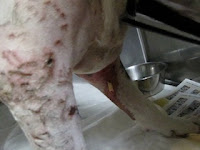 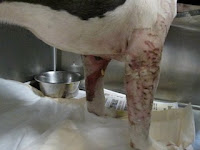 She was terrified to get into the car and we soon discovered she was terrified of just about everything but other dogs. She loves my two labs and likes to annoy the cats. She adores my girls, me not so much, as I am the disciplinarian around here.She is slowly adjusting to new situations and has pretty much stopped the 'nervous urination' that was constant the first 6 months.
In May another, pit was found wandering my neighborhood. After a bit of a chase I managed to corner her in someone's yard and managed to lasso her and bring her home. She was an older, spitting image of Ruby. Swollen vulva. Her mother perhaps? Only time I ever saw Ruby show any fear towards another dog. She was shaking like a leaf and trying so hard to get away. Was this the dog who mauled her? I called animal control and then called the D.A.'s  office to report that dogs were being dumped here. Now it's official, my neighborhood has become a dumping ground for unwanted pits.

Posted by Michelle at 1:16 PM 0 comments 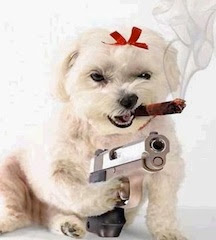 Posted by Michelle at 8:28 PM 0 comments 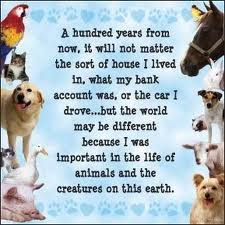 Posted by Michelle at 7:28 PM 0 comments