How to Safely Break Up a Dog Fight


How to Safely Break Up a Dog Fight

It’s a skill everyone hopes they’ll 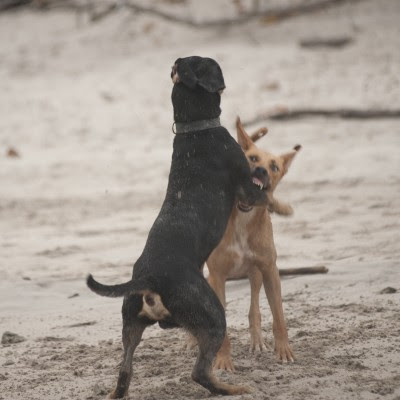 never need to use but should know,  especially dog owners: how to safely break up a dog fight. Like humans, not all dogs simply get along. Even the most gentle mannered dogs are
capable of a dangerous fight when provoked.

During a scuffle, a dog owner’s first instinct is to reach into the middle of the fight and try to grab their dog by the collar. This technique is not only ineffective, but also very dangerous. The odds of you being badly injured
or bitten while reaching for a fighting dog’s collar are very high. Two furious animals in the middle of a serious fight are normally in survival mode. If they spot you at all, they likely won’t recognize you as the loving owner they are cognizant of. The moment you charge in and reach for their collars, they may respond out of a fight reflex and then bite, or they might perceive you as another threat or attacker.

While there are always dangers associated with breaking up fighting dogs, there is a way to do it that minimizes your own risk of injury.

Breaking Up a Dog Fight with Another Person

1. Each of you shall grab the back legs of the fighting dogs, and then pick them up like wheelbarrow. With the dogs’ legs up, they are pulled apart and kept from each other.
2. Do this by circling behind one pooch, grabbing his back legs, and then raising them up into the air. Without the use of his back legs, the dog will be forced to stand on his front legs and will not be able to continue fighting.
3. Separate the dogs as you back away slowly. Just hold their feet or legs continually as you carefully move in a smooth backward arc. That way, your pet won’t be able to reach around and bite you. Because the dog will only be using his front legs, he’d be kept from maneuvering with any agility.
4. The moment you have reached a safe distance, at least about 20 feet away, try holding the dog securely until he calms down. Turn him away so he doesn’t see the other dog, and try to change his state of mind using distraction.

Splitting up a Dog Fight While Alone

1. It’s extremely dangerous to pull two aggressive dogs apart when you’re all by yourself. However, if the situation asks for it, move forward carefully with the plan below.
2. Get a leash if you don’t have one with you. The dogs will surely continue on fighting as you look for a restraint, but you have to take the necessary steps to guarantee your own safety.
3. Try approaching one of the dogs, especially the aggressor, if you can determine which dog this is, and the moment you’re close enough, loop the leash around the dog’s belly, just in front of his back legs. Try slipping the free end of the leash through its looped handle, and then pull it taut. Immediately back away, as you pull the dog, till you get to something you can fasten and secure the pooch to, perhaps a fence post or a telephone pole.
4. After this, move towards the second pooch from behind, grab him by the hind legs, and then pull him away using the same method above. Drag the dog using the wheelbarrow method at least 20 feet away from his opponent, and find a way to restrain him until help arrives.

Remember that breaking up a dog fight is very, very dangerous, and should only be done using the method above. Before reaching into a dog fight, always try other methodsfirst, like distracting the dogs or making a loud, sharp noise to get their attention. Do not panic or scream, as this could simply agitate the fighting dogs further.
Posted by Michelle at 8:35 PM 0 comments

An Important Message to our Ohio Peeps

Posted by Michelle at 9:20 AM 0 comments