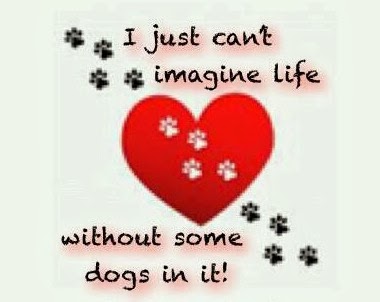 Posted by Michelle at 9:04 AM 0 comments 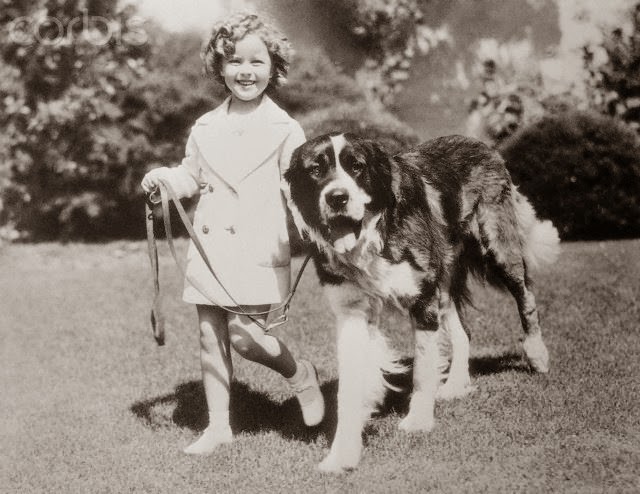 Beautiful lady, you will be missed.
Posted by Michelle at 12:23 PM 0 comments

Lead or be led 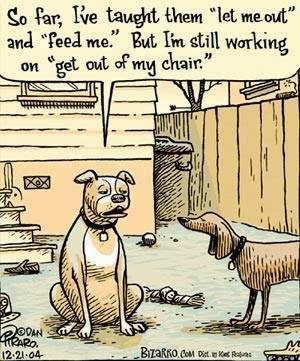 "In every dog-and-handler team, without exception, there is a leader and there is a follower."
Dianna M. Young  'Think Like Your Dog'
Posted by Michelle at 11:49 AM 0 comments 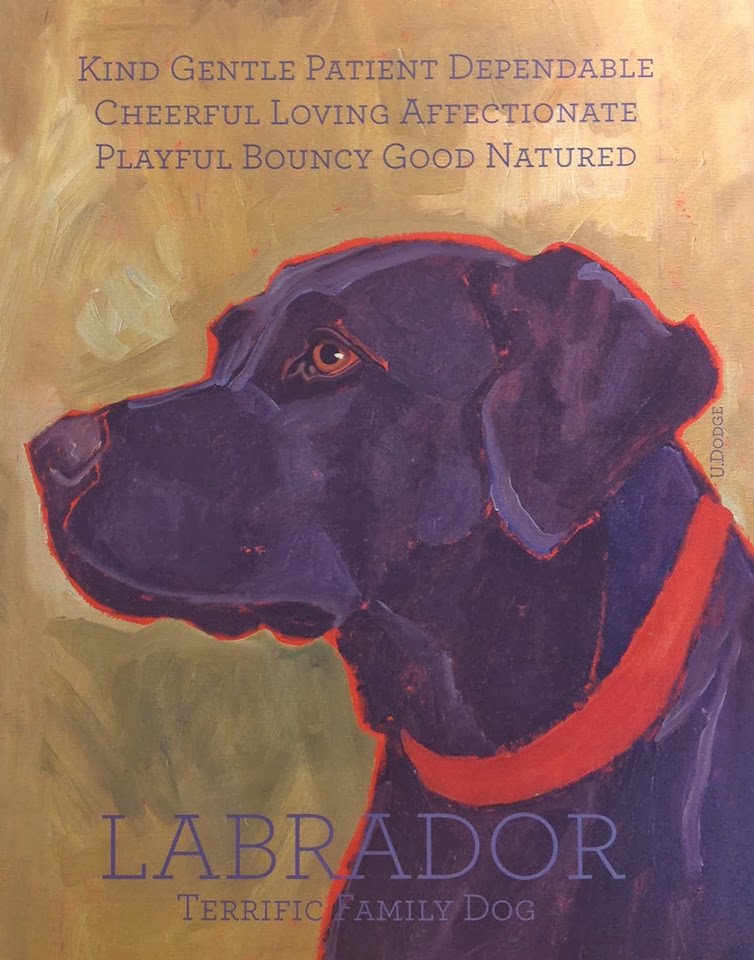 
Can walking the dogs show who's the leader of the pack?

Date:
January 23, 2014
Source:
University of Oxford
Summary:
Dogs' paths during group walks could be used to determine leadership roles and through that their social ranks and personality traits, say researchers. Using high-resolution GPS harnesses, scientists tracked the movements of six dogs and their owner across 14 30-40 minute walks off the lead. The dogs' movements were measurably influenced by underlying social hierarchies and personality differences.

Dogs' paths during group walks could be used to determine leadership roles and through that their social ranks and personality traits, say researchers from Oxford University, Eötvös University, Budapest and the Hungarian Academy of Sciences (HAS).

'We showed that it is possible to determine the social ranking and personality traits of each dog from their GPS movement data,' said study author Dr Máté Nagy of Oxford University's Department of Zoology, formerly of Eötvös University and HAS. 'On individual walks it is hard to identify one permanent leader, but over longer timescales it soon becomes clear that some dogs are followed by peers more often than others. Overall, the collective motion of the pack is strongly influenced by an underlying social network.'
The study, published in PLOS Computational Biology, demonstrates the power of path tracking to measure social behaviour and automatically determine dogs' personalities. In future, one possible use of the technology would be to assess search and rescue dogs to see which dogs work best together. As dogs are ideal models of human behaviour, the same methods could be used to study social interactions in humans such as parents walking with their children. The study is part of the European Research Council project COLLMOT led by Professor Tamás Vicsek (Eötvös University and HAS) which aims to understand the collective motion a wide variety of different organisms in nature.
How dogs behave during walks reveals a lot about traits such as trainability, controllability, aggression, age and dominance. Dogs that consistently took the lead were more responsive to training, more controllable, older and more aggressive than the dogs that tended to follow. Dogs that led more often had higher dominance ranks in everyday situations, assessed by a dominance questionnaire.
'The dominance questionnaire tells us the pecking order of dog groups by quantifying interactions between pairs,' said Dr Enikő Kubinyi, senior author of the study from the Hungarian Academy of Sciences. 'For example, the dogs that bark first and more when strangers enter the house, eat first at meals and wins fights are judged as more dominant. Conversely, dogs that lick other dogs' mouths more often are less dominant as this is a submissive display.'
Pack leadership is well-established in wolves, where packs are typically led by a single breeding pair, but there is still much debate as to whether groups of domestic dogs have a social hierarchy.
'These dogs have no breeding pair,' said Dr Kubinyi. 'However, there are dogs who take the lead more often than others. On average, an individual took the role of the leader in a given pair in about three quarters of the time. This ratio is of similar magnitude to the case of wild wolf packs with several breeding individuals. Using this qualitative data over longer time scales allows us to see the more subtle relationships that might otherwise be missed. Of course, hierarchies are likely to vary across breeds and individual groups, so we hope to use this technology on other animals in future to investigate further.'
The dogs used in this study were of the Vizsla breed, a Hungarian hunting dog known for their good-natured temperament and trainability. It is interesting to note that the leader-follower relationships were always voluntary; dogs chose who to follow and the leaders did not compel other dogs to follow them.
The technology used in the study could be applied to other dogs used for search and rescue to provide quantitative data allowing handlers to compare how different dogs work together and pick those with the highest compatibility. Each device weighs only 14 grams and further sensors such as gyroscopes could be used to determine what each animal is doing at a given time.
Story Source:
The above story is based on materials provided by University of Oxford. Note: Materials may be edited for content and length.
Journal Reference:
Cite This Page:
University of Oxford. "Can walking the dogs show who's the leader of the pack?." ScienceDaily. ScienceDaily, 23 January 2014. 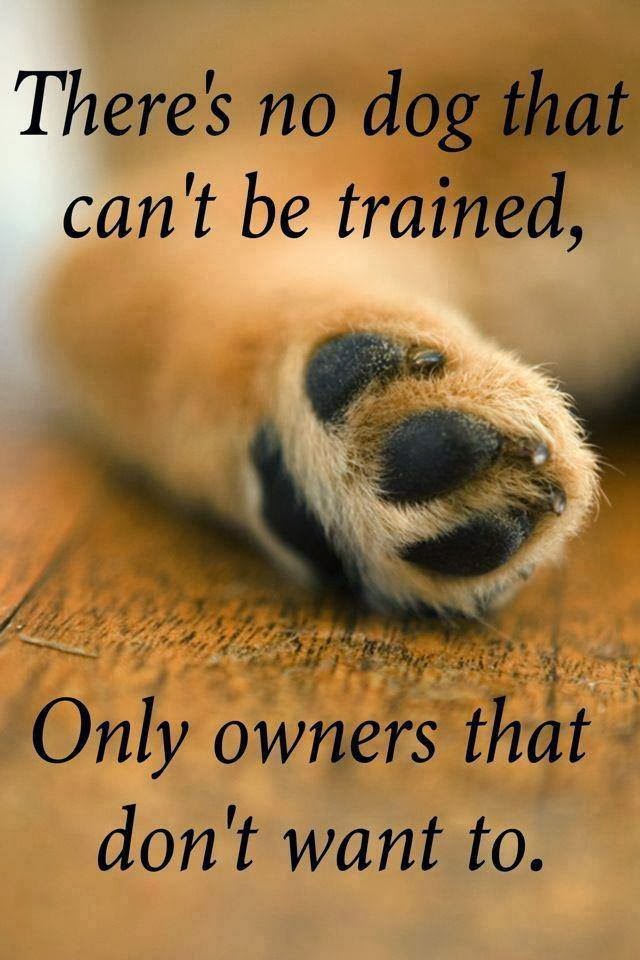 7 MISTAKES YOU'RE MAKING IN BEHAVIOR MODIFICATION

While I find ideas like the Yellow Dog Project admirable, we're still trying to teach people not to leave their dogs in the car on hot summer days while they shop at the mall, so it's going to be a while before this becomes common knowledge.  In the meantime, you're still stuck with trying to explain to someone what the ribbon means.  Better to give your explanations over your shoulder or not at all.
YOU'RE NOT LISTENING
If your dog is reacting in a way you don't like, he's telling you something.  He's telling you that the environment or situation you have him in is too much, that he doesn't know how to handle it.  LISTEN to what his behavior is telling you, then stop putting him in those situations where he feels the need to either escape or defend himself.  That's not training.  Training is about preparing your dog for those situations, teaching him behaviors that help him cope.  If he's relying on escape or aggression, that means he is not prepared.
It is your job as his owner, his guardian, his leader, his hairless ape, or whatever you choose to call yourself, it is your responsibility to keep him safe.  When he reacts with fear or aggression, that means that you set him up to fail.  I say this not to make you feel guilty, but to encourage you to listen to your dog.  If you don't, he's going to resort to instinctive behaviors designed to keep him safe.
CONCLUSION
I could probably go on, but these are the most common mistakes I see.  And it's not at all uncommon to find these mistakes made among those who claim force-free methods didn’t work on their dog.
My hope is that this article will help you recognize the common mistakes we all make – not to make you feel bad, but to help you make the adjustments necessary for success.  I've had to re-evaluate and make adjustments many times over the course of my career, and no doubt I will have to do it many more times.